2
Dear Dr. Einstein:
Please explain why the 1919 observation of the bending of starlight was “front-page physics”? Did a heavenly star make you a celebrity star?

Dear “starlight”:
I suggest you look at the diagram below, “Bending of Starlight”. In the upper left corner is an image of our Sun with the distant starlight appearing to bend as the starlight grazes the edge of the Sun. (Technically this had to be done during a total eclipse of the Sun so the bending could be seen without the blinding sunlight.) Notice how the image of the Sun rests on a two dimensional grid, where the grid lines bend to suggest that the space around the Sun is “curved”. The cannon ball resting on a mattress is another way of imagining how the light travels around the massive Sun. “Mass tells space-time how to curve, and space-time tells mass or light beams how to move”, according to John Wheeler. 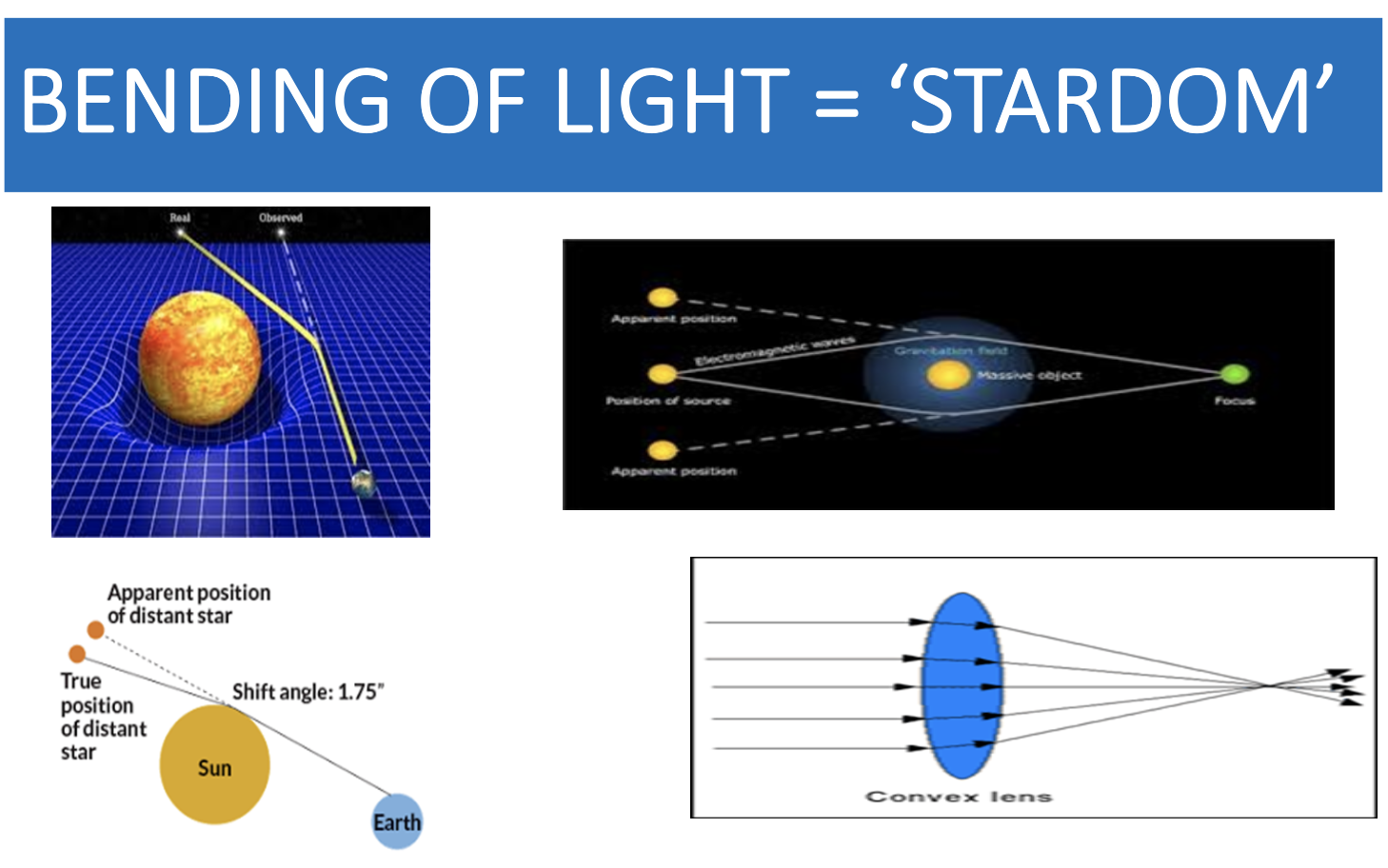 In the lower left part of this diagram, you see how slight an angle the light beam was deflected. By an amount equal to the size of a quarter (about an inch) as seen at a distance of four miles. In the right side of the diagram, you see how the bending of starlight can mimic a convex lens. This becomes the basis for “gravitational lensing” and a new field of observational astronomy. Astronomers can see behind or beyond distant objects like stars or galaxies using my equations, to see further than ever.

4
Dear Dr. Einstein:
I understand that before you became a world famous celebrity because of the bending of starlight, you were
known among scientists for outstanding work you did in 1905. What was that all about?

Dear “1905”:
Yes, it’s true. I published four papers that year that were considered worthy of four Nobel prizes. One on the Photo-electric effect, for which I was awarded the Nobel in 1921. One on Brownian motion. One on Special Relativity. And my most famous discovery: the equivalence of mass and energy E=mc2.

6
Dear Dr. Einstein:
Would you please explain the photo-electric effect?

Dear Certainly:
When light falls on certain metals, electrons are ejected. The intensity of the light determines how many electrons. The color of the light determines whether or not electrons are ejected at all. Red light does not eject photoelectrons (even if it is very bright). Green light does eject photoelectrons (even if it is very dim). If light is considered a wave, the electron-ejection phenomenon cannot be explained. But I considered light to come in small energetic bundles, or particles, or “quanta”. The bluer the light, the more energetic the bundle is. Above a certain energy of the light bundles (at a certain degree of blue-ness), electrons were ejected. And below this energy, none were emitted. I took this to mean that the light quanta had enough energy to un-bind or to pry- away the electron from the atom it was bound to. For this was the first instance when a quantum theory was used, in order to correctly explain an experimental result. Much later on, I was not fond of “quantum mechanics” and Neils Bohr’s interpretation of it as sharp images of a blurry reality. I believed quantum mechanics provided a blurry image of a sharp reality.

8
Dear Dr.Einstein:
How about Brownian motion?

Dear “Brownian”:
The Roman philosopher Lucretius (60BC) wrote “On The Nature of Things”: “Observe what happens when sunbeams are admitted into a building and shed light on its shadowy places. You will see a multitude of tiny particles mingling in a multitude of ways… their dancing is an actual indication of underlying movements of matter that are hidden from our sight… It originates with the atoms which move of themselves [i.e., spontaneously].” The idea that molecules of a liquid or gas are constantly in motion, colliding with each other and bouncing back and forth, is a prominent part of the kinetic theory of gases to explain heat phenomena. According to the theory, the temperature of a substance is proportional to the average kinetic energy with which the molecules of the substance are moving or vibrating. It was natural to guess that somehow this motion might be imparted to larger particles that could be observed under the microscope; if true, this would be the first directly observable effect that would corroborate the kinetic theory. And that’s what I did using statistical mathematics.

Dear “Special”:
I will try my best. So here goes. 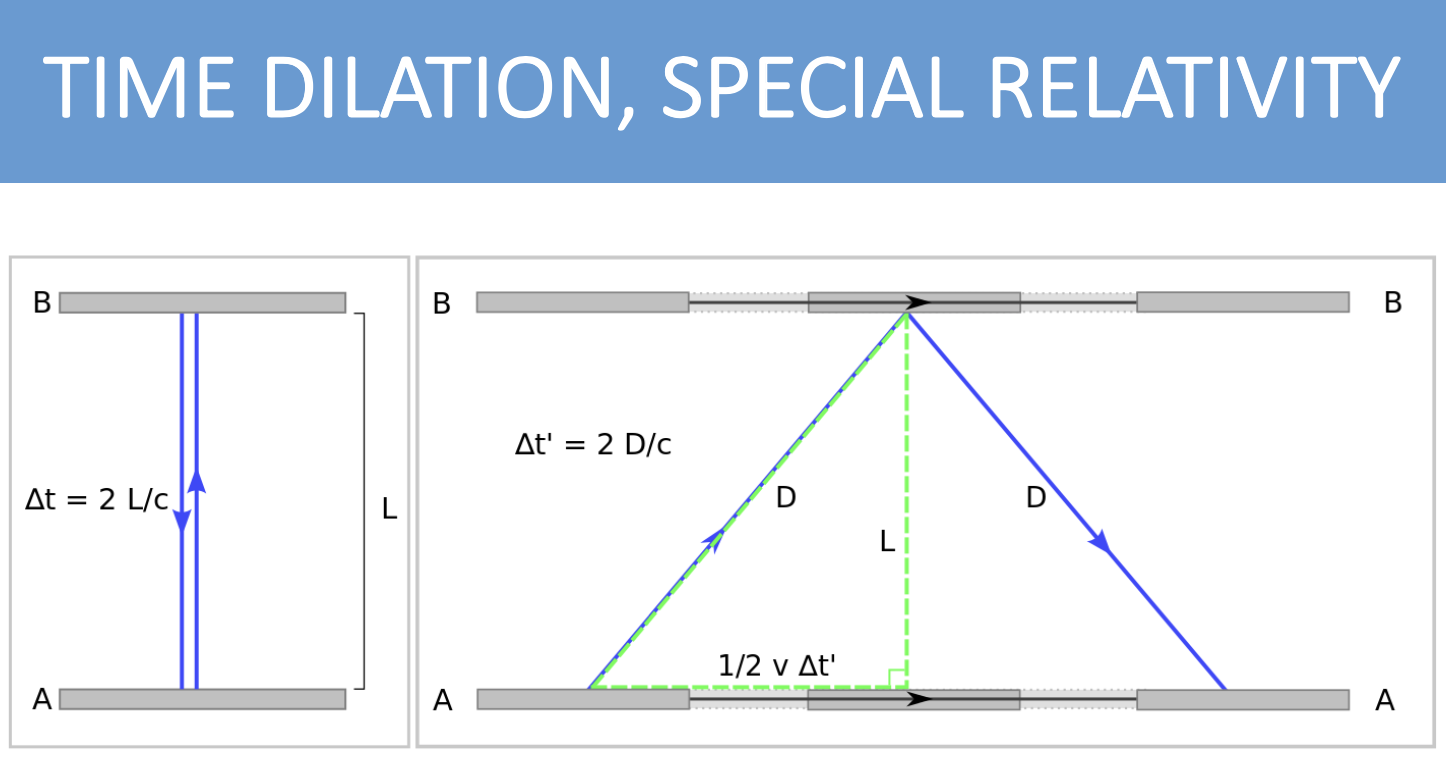 In this diagram, on the left side, imagine a woman is in a train and she sends a beam of light from the floor to the ceiling and back to the floor. The amount of time the beam takes from her vantage point inside the train is the beam’s path (2L) divided by the speed of light (c).

The right hand diagram visualizes what a man on the platform would see of her train moving past him from his vantage point. The light beam would appear to slant right and upwards, and then slant right and downwards due to the motion of the train rightwards. The path is longer D from his point of view, so the time of flight the man observes is 2D divided by the speed of light(c).

Here’s the hard part. The speed of light(c) observed by the woman in her apparently stationary train is exactly the same speed of light(c) observed by the man on the platform watching her train move past him. This result is based on the famous surprising Michaelson-Morley experimental result that showed the speed of light is always the same no matter what is the speed of the source of light or the speed of the observer! So this means that the man will observe a longer time interval as viewed from the platform than the woman observes as viewed from inside the train. In other words, time will appear to slow down in moving systems observed from a stationary system. This result has been confirmed many times by observing the half life of decaying particles at rest compared with their half-life when they are moving near the speed of light. This is one of the counter-intuitive results of Special Relativity. 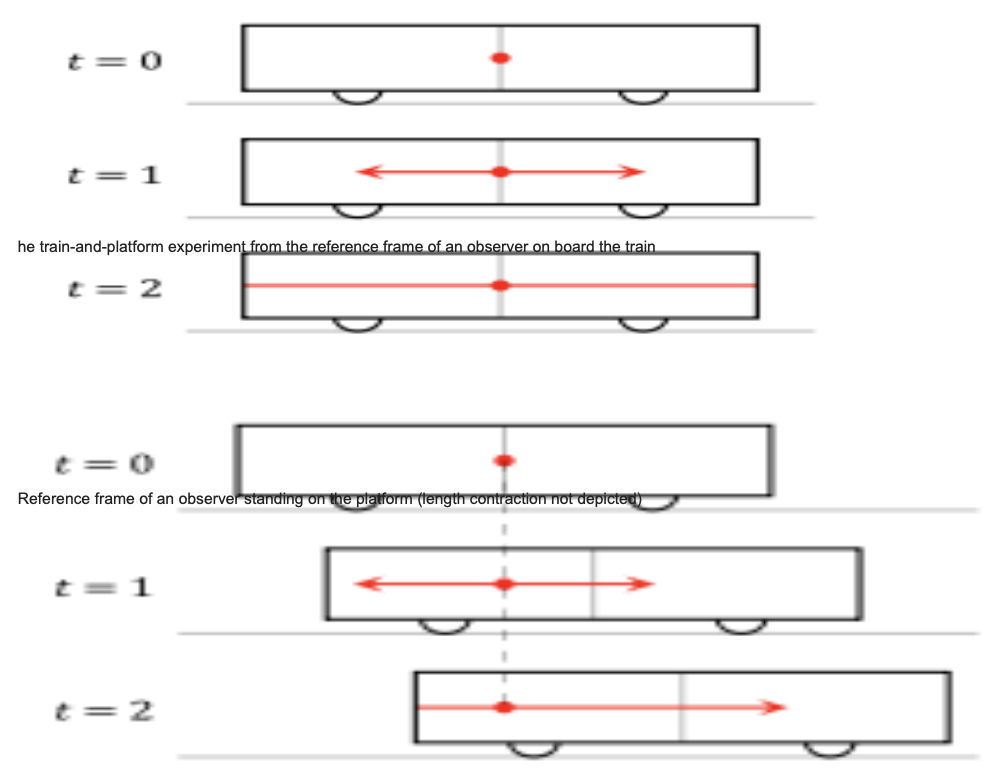 Another counter-intuitive result is that events that are simultaneous in a stationary frame of reference (see diagram above) are not simultaneous in a moving frame of reference (see lower diagram). The Michelson Morley experimental apparatus looks like this. It allows the speed of light to be compared in two directions perpendicular to each other by splitting the beam into two and then recombining them. If the apparatus is moving to the right, then the light wastes time chasing the apparatus transverse to the direction of motion. When the role of the two arms is exchanged by rotating the apparatus there should be a change in the he train-and-platform experiment from the reference frame of an observer on board the train Reference frame of an observer standing on the platform (length contraction not depicted) 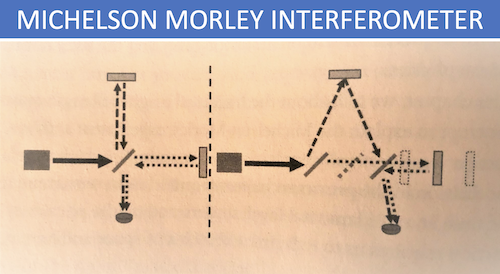 Dear “E=mc2”:
If a body emits energy E in the form of radiation, its mass decreases by an amount equal to E/c2. In other words, mass and energy are both different manifestations of the same thing. This is a somewhat unfamiliar conception for the average person to accept. I can derive this result but it would take several pages here. So instead I have decided to show you the first nuclear-powered aircraft carrier the ENTERPRISE with the result emblazoned on its deck. It must be true if someone thought to do this. 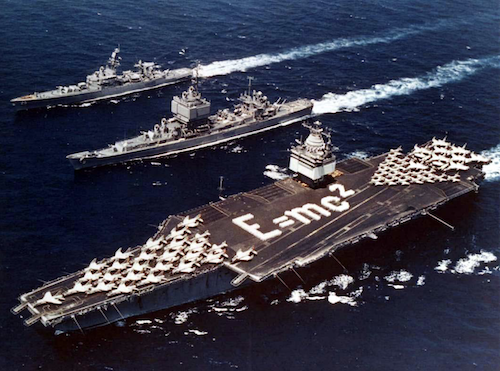